The U.S. Department of Energy has released a report on the cost-effectiveness of linear LED lamps. The report is based on a study that compared a two-lamp troffer using LED lamps (38W total power draw) and fluorescent lamps (51W total power draw) over a 10-year period. Factors taken into consideration include initial investment, energy use and lifetime replacement needs. Variables included the LED system cost (ranging from $40 to $120), the annual operating hours (from 2000 to 4,000 hours), the installation time (from 15 to 30 minutes) and electricity rates (from $.06 to $.24).In general, while their initial cost premium remains high, linear LED lamps are more likely to be cost-effective when electric utility rates are higher than average, hours of operation are long, and installation time is shorter.

Linear LED lamps may also be a good solution to difficult maintenance issues, as was the case at the auditorium of the Eisenhower Middle School at the Norristown (PA) School District (see photo below). The existing linear fluorescent fixtures needed frequent maintenance and replacement but the fixtures could only be accessed by climbing up three levels via ladders and a catwalk. GreenTech Energy Services was hired to retrofit the fixtures with LED tubes.  The initial cost of the lamps was slightly higher than fluorescents would have been, but they provide much longer life and significant energy savings, while requiring little or no maintenance. 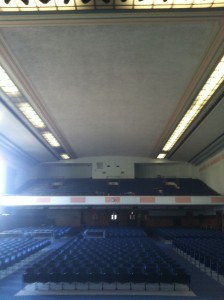 LED troffers were also the answer to a challenge at the Mussleman School, another middle school in the Norristown district. The existing lights in the hallway needed an upgrade, but the only thing that would fit in the ceilings were LED flat panels. These sleek fixtures are a fraction of the thickness of traditional troffers, yet they provide a clean, white light that easily meets required light levels. 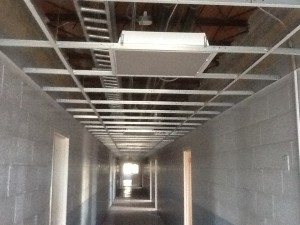